Pollution is one of the severe challenges faced by smart cities. And as already predicted that the population in smart cities will grow exponentially, the fight with pollution will rather become more intense in the coming years.

Currently, more than 50% of the global population is residing in less than 2% of the earth’s surface area. This has lead to the increasing traffic, industry and energy needs in the urban space that already accounts for about 70% of global greenhouse gas emissions.

Literally speaking, cities are breathing stuffy air. The report published by WHO in May 2018 reveals that 90% of the world’s population breathes air containing pollutants that are much higher than the recommended limit. Furthermore, it also reveals that the effects of air pollution lead to seven million deaths each year. However, WHO is positive that cities are capable of improving their air quality through local measures. This can be implemented in the form of smart infrastructure or rather simple solutions like changing traffic regulations in the highly polluted areas of the city. Or, providing incentives for cyclists or pedestrians. But to implement these measures cities require information on how pollutant levels change over time in specific locations. For the same, the German tech giant, Siemens has come up with a potential solution for smart cities. What is it? Let us find it out from the discussion given below.

Intelligent Software To Bring A Breath Of Fresh Air

Siemens has developed an intelligent software that is capable of accurately predicting the degree of air pollution in smart cities by tapping into the abilities of artificial neural networks. The software can give information on air quality several days in advance, allowing cities and their citizens to take measures to improve the quality of life. According to Siemens, this is the “smartest tool available for cities to improve their air quality.”

Dr. Ralph Grothmann from Siemens Corporate Technology (CT) developed the air pollution forecasting model that is based on neural networks. Neural networks are computer models that work like a human brain. Grotham says that these networks learn to make predictions and recognize relationships by undergoing training. His model relies on deep neural networks that use more layers of artificial neurons as opposed to models built in the past. Neural networks is a proven technology at Siemens for many years. For instance, the network has been used to predict levels of raw materials prices, economic activity and also the electricity generated from renewable energies.

While developing the forecasting tool, Grotham relied on the emissions and weather data collected by 150 sensor stations in the city of London. This data helped in training the system. Emission measurements were gathered for gases including carbon dioxide, carbon monoxide, and nitrogen oxides. The development of these emissions was then integrated with the weather data for the same period of time. During the course, factors such as humidity, solar radiation, cloud cover, and temperature were considered. Specific events such as weekends, work days, sports events, trade shows etc. were also programmed into the model as these have the impact on traffic and pollution in different ways.

Depending on the final data and the seasonal and real-time weather forecasts, the neural network had to learn to predict the degree of air pollution. The training process involved hundreds of iterations and the forecasting system began to make better predictions with more accuracy. Now the system is able to predict the level of air quality across 150 places in London with an accuracy rate of more than 90%.

In case the system predicts a high level of air pollution in a particular location in the city, the government can take temporary measures like blocking heavy-duty vehicles from entering the area for certain hours or giving a free ride to citizens to use local public transportation. Additionally, it also allows health conscious people to avoid certain areas that are highly stuffy to breathe. 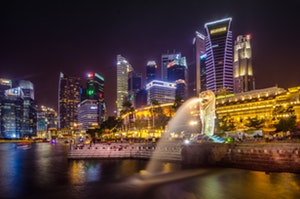 Siemens has named its cloud-based intelligent software as ‘City Air Management (CyAM).’ At World Summit in Singapore, the company announced that CyAM collects data on air pollution from the sensors installed across the city and displays the predictions on a dashboard. These forecasts are made up to five days in advance.

Siemens revealed that this software can help smart cities to take measures for reducing nitrogen oxides and atmospheric particulate matter. The system can recommend up to 17 measures which can be acted upon by the city at short notice.

Siemens has collaborated with Sino-Singapore Guangzhou Knowledge City (SSGKC) to deploy CyAM in the Guangzhou Development District in China. CyAM will be deployed in the Green City Digital Platform which is a new urban hub (smart city project) in the SSGKC.

Going further, Siemens will also set up a Green City Digital Exhibition Center in a business park situated within SSGKC. This initiative will provide real-time air quality monitoring, assessment, recommendations on technology measures and impact prediction. The center will be developed in an area approximating to 250 sq.m and is prepared to be ready by the first quarter of 2019.

Citizens in Zurich are happy with the smart city initiatives implemented by the city. Thanks to the large investments made in smart tech that focuses on improving the quality of life of its citizens. One of its successful projects is ‘OpenSense’ that uses ultrafine particle maps created with measurements from its mobile air pollution monitoring network to develop the iOS and Android applications – The Health-Optimal Route Planner. The app provides the citizens with a health-optimal routing service.

Air quality in Qatar has become a priority due to increasing population and heavy car use. The Qatar Foundation (QF) is committed to taking measures in enhancing the environment of the city. QF has selected Hawa’ak Environment Monitoring System which provides a detailed and comprehensive recording of potentially harmful gases in the environment.

The air pollution sensors in the city capture data on ozone and particulate matter which can be hazardous for health. The sensor stations record weather conditions, wind speed and direction, temperature, rainfall and relative humidity. Additionally, the city is carrying out educational programmes related to air quality and environment to bring awareness to children and families.

Chicago has rolled out a major initiative to test the limits of big data and urban sensor networks with their Array of Things project. The sensors in the city will provide data on air quality including measurements on carbon monoxide and nitrogen dioxide levels. It also has plans to record pollutants such as volatile organic compounds, particulate matter, and ozone in coming years.

The city has deployed ‘Elm’ the network of air monitoring sensors that is fully integrated with a real-time view of air quality in local communities. These devices are placed in areas where citizens can get the most out of it.

Air quality defines the health and quality of life in smart cities. The initiatives implemented by smart cities around the world are commendable as they pave the way to a more sustainable and livable tomorrow. Thanks to industrial giants like Siemens that come up with great solutions to combat the challenges.

Private Sectors Coming Together Against COVID-19